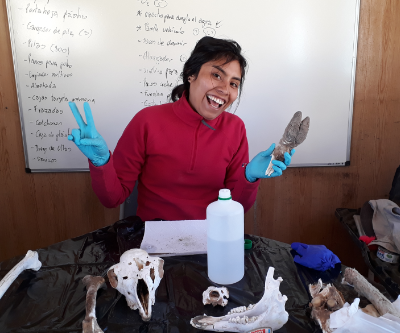 Finding out how evolution can be evidenced through genetic processes has always been my research interest, using population genetics is how I learned to approach this. Even better, learning how to  use this knowledge as an evidence for conservation. Population genomics is the main research topic, the main phenomena I have researched are hybridization and admixture. For my PhD thesis I want to take the next step and
(1) assess evolution in another time dimension, using extinct population's genetic data;
(2) associate statistically adaptations to environmental variables.

This project will look at both of population genomic aspects (adaptive evolution and demographic history) of orang-utans using extant and extinct genetic data. Orang-utans (Pongo sp.) are currently distributed in the islands of Borneo and Sumatra but were initially distributed across Sundaland, reaching parts of Java and Southern China. With the use of ancient DNA techniques, museum samples allow us to delve deeper into the past genetic history of orang-utans, including extinct populations. Genome segments obtained from these historic samples would allow us to screen genetic diversity from new populations and compare them to the current populations which we have sampled.

The first part of this thesis will explore changes in Bornean and Sumatran orang-utans’ genetic diversity levels using historic DNA samples to see if there has been a loss of genetic diversity within their populations of the last two centuries compared to populations from the present. We will also infer historic species ranges using museum samples to see if Pongo tapanuliensis had the same restricted geographic range.

Geographical changes and climatic oscillations are thought to have acted as selective forces that produced the adaptations we see today at a genomic level in orang-utans. Previous work showed significant differences in the adaptive evolution of P. pygmaeus and P. abelii, which can be explained by long-lasting environmental differences. However, the adaptive evolution of orang-utans has not yet been explored in a more fine-grained manner, especially at smaller geographic scales in Borneo, where orang-utans occur in diverse habitats.

The second part of the PhD project will deepen the study of orang-utan adaptations by associating them to environmental variables in a population-wise manner. We will detect drivers of these adaptations using a landscape genomics approach, integrating the genomic results with abiotic and biotic information from the past and present.